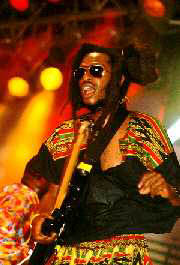 Steel Pulse is a roots reggae musical band from the Handsworth area of Birmingham, England, which has many Afro-Caribbean, Indian and other Asian migrants. They originally formed at Handsworth Wood Boys School – composed of David Hinds, Basil Gabbidon, and Ronald McQueen; along with Basil’s brother Colin briefly on drums and Michael Riley. Steel Pulse were the first non-Jamaican act to win the Grammy Award for Best Reggae Album.

Pulse at The Palace

Grammy award-winning reggae band Steel Pulse has been true to their roots for over 35 years. One of Bob Marley’s favorites, the band has maintained a sense of fierce integrity as it strives to get the message of love and justice across to all people. The Grammy-winning band released a number of highly acclaimed albums and embarked on numerous world tours which have included shows in every continent.  Steel Pulse have also been active in a variety of charitable works throughout the years including generating funds for the hurricane victims of Jamaica and New Orleans as well as their most recent project; funding the building and installation of solar panels for a hospital and clinic in earthquake stricken Haiti.