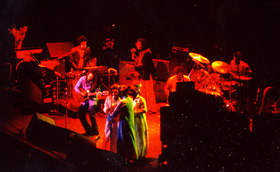 Bob Marley Inducted to Rock and Roll Hall of Fame

Bono’s (U2) Bob Marley Induction Speech to the Rock and Roll Hall of Fame.

“I know claiming Bob Marley as Irish might be a little difficult, but bear with me. Jamaica and Ireland have lots in common¦ Chris Blackwell, weeds, lots of green weedsâ€¦ religion¦ the philosophy of procrastination (don’t put off till tomorrow what you can put off till the day after), unless of course its freedom.

We are both islands, we are both colonies, we share a common yoke¦ the struggle for identity, the struggle for independence. The vulnerable and uncertain future that is left behind when the jack boot of the Empire has finally retreated¦ roots¦ the getting up, the standing up¦ and the hard bit, the staying up¦ in such as struggle, and often violent struggle, the voice of Bob Marley was a voice of reason; one love, ONE LOVE! So when I first heard Bob Marley, I not only felt it, I felt I understood it.

It was 1976; in Dublin we were listening to punk. It was the Clash and Eric Clapton’s cover of “I Shot the Sheriff” that brought him home to us. Bob Marley and the Wailers had love songs you could admit listening to, songs of hurtâ€¦ hard but healing.

Songs of freedom where that word meant something again. New hymns to a dancing God, redemption songs, a sexy revolution where Jah is Jehovah on a street level, not over his people. Not just stylin¦ Jammin! The Lion of Judah down the line of Judah from Ethiopia, were all began for Rastaman. Were everything began¦ well maybe.

I spent some time Ethiopia with my wife Ali and everywhere we went, we saw Bob Marley’s face¦ bonal, wise. Solomon and the Queen of Sheba on every street corner; there he was dressed to hustle God. “Let my people go”, an ancient plea¦ Prayers catching fire in Mozambique, Nigeria, Lebanon, Alabama, Detroit, New York, Notting Hill, Belfast¦ Doctor King in dreads, a third and first world superstar.

Meant to slavery and were imagination begins.

He was the new music rocking out of the shanty towns born from calypso and raised on the chilled out R&B beamed in from New Orleans¦ lolling lopping rhythms¦ telling it like it was, like it is, like it shall be¦ skanking.

Ska, bluebeat, rock steady, reggae dub and now ragga, and all of this from a man who drove three BMWs! BMW?! Bob Marley and the Wailers!

Rock-and-roll loves its juvenilia, its caricatures, its cartoons, the protest singer, the gospel singer, the pop star, the sex god, your more mature messiah types. We love the extremes and we’re expected to choose… the mud of the blues or the oxygen of the gospel, it hellbound on our trail or the band of angels. Marley didn’t choose. Marley didn’t walk down the middle, he raced to the edges, embracing all extremes and creating a oneness. His oneness; One Love.

A Rasjohnmon Concert
Compilation of Bob Marley and The Wailers recorded in New York City, Paris,
Berlin and Kingston, JA.
MarleyConcertMix.zip
(Right click and select “Save Target As” to download file to a location on your computer)
345.21 MGB